After the talks, Serbia's President and U.S. Senators gave statements to the press. Conclusion: Belgrade and Pristina need to reach compromising solution 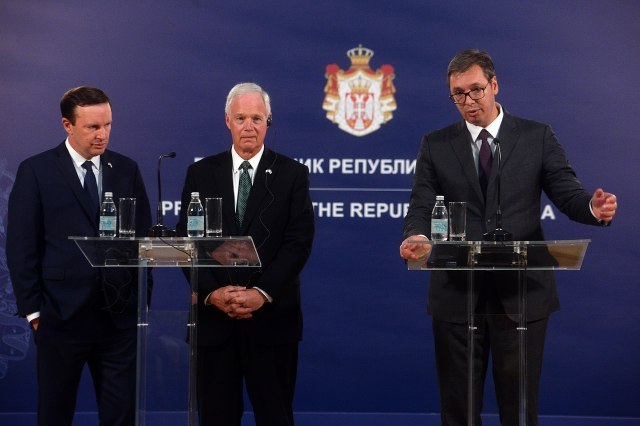 Serbian President Aleksandar Vucic stated, after the talks with Senators Ron Johnson and Chris Marfy, that both sides should lose equally, in order for both sides to gain equally". "This is the only way to strike the deal", Vucic reiterated.

He told reporters after the meeting that he conveyed to the US senators an unequivocal stance that Serbia expects the abolishing of taxes and wants a compromise, but that a deal can't be about fulfilling one side's goals, without the Serbian side getting anything.

"This should be an agreemen in which both sides lose equally, in order for both sides to gain equally", Vucic said during a press conference.

Vucic said that Belgrade is ready for any conversation because that is healing, adding that improving relations between Serbs and Albanians and establishing lasting peace would be of great benefit to Serbs and Albanians, as well as to all peoples living in the region.

He thanked the senators and said that he highly appreciates their efforts to find a solution to resuming the dialogue. Vucic also said that Serbia's interest is to intensify high-level political dialogue and that relations between the two countries need to be based on a partnership.

He said he was grateful to the senators for visiting and engaging in the region and for their desire to preserve stability and achieve lasting peace. "I am convinced that the desire to improve relations between Serbia and the US is mutual", said Vucic, adding that there was also talk about economic cooperation that will greatly benefit the citizens.

"Uveren sam da je želja za unapređenje odnosa naše dve zemlje obostrana i da će Srbija od toga imati koristi, od uvećavanja trgovinske razmene do učestvovanja u svim važnim projektima, jer Amerika je najmoćnija sila sveta. Zahvalan sam senatorima što se trude da dijalog Beograda i Prištine bude nastavljen i da kompromis bude postignut, kao i na podršci koju pružaju ostvarivanju punopravnog članstva Srbije u EU." - Obraćanje predsednika Vučića nakon sastanka sa američkim senatorima Ronom Džonsonom i Krisom Marfijem. . . . „I am convinced that the desire for improvement of relations between our two countries is mutual and that Serbia will benefit from it - from the increase in trade exchange to participation in all important projects as America is the greatest power of the world. I am grateful to Senators for their efforts aimed at continuation of the dialogue between Belgrade and Priština and at achieving a compromise, as well as for their support they extend to the full membership of Serbia in the European Union." - Address of President Vučić after the meeting with the US Senators Ron Johnson and Chris Murphy.

U.S. Senator Ron Johnson said that Belgrade and Pristina should give something in order to gain something in return.

Senator Chris Murphy said that resolving the Kosovo issue requires a major compromise and can only be done if sacrifices are made by both sides. Probably the agreement won't be satisfying to either side, but when it be in effect, potential benefit of the whole nation will be much better", Johnson concluded on the press conference.

"Of course, the biggest pressure will be on Serbia. But Serbia cannot recognize Kosovo's independence unless a compromise is reached. And there's no great philosophy here. And whoever likes to, can torment us", Vucic said at the news conference.

He said that Serbia is making progress and that US appreciates it and wants to encourage it.