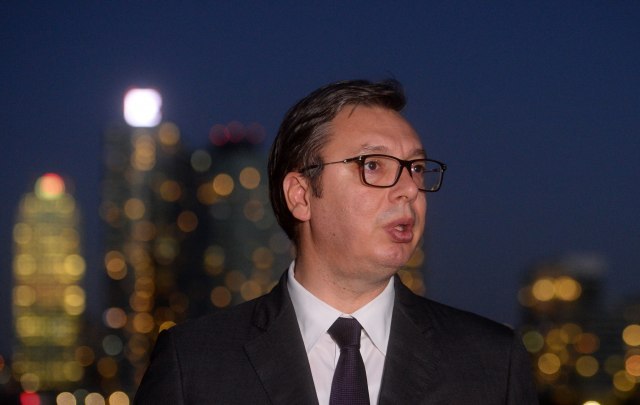 But, he added, in tactical terms, we should try to do everything we can to create a more favorable position for our people and country.

"The tactical battle will continue, and I can only speak in strategical terms if we had some kind of framework agreement in our heads, that would be a strategic decision. Everything else is a tactical maneuver", he explained.

Vucic said that we are still far from reaching the agreement, and that it is all about people's mindset - what are the wishes of both Serbs and Albanians, whether we can understand what lies ahead for us or we cannot understand each other, and that it is not a matter of months and years.

"It can happen in five months, it can happen in 50 years, and it can never happen," Vucic replied when asked if we were away from the agreement for months or years.

Commenting on his speech, in which he said it was good that Serbia was not mentioned at the UN General Assembly, Vucic said that he had opted for an approach, which had received the support of Asians, Africans and many other freedom-loving nations.

"They gather us here as children to come and watch what the big powers have to say. We get together, 2.000 of us, we listen, we ask God not to mention us, and then we're happy. I said - they're great powers, they will always decide a lot, but let's see what we can decide. Let us cooperate more, preserve our libertarian spirit, independence in decision-making, but also our sovereignty and territorial integrity, striving as small countries to fight for our rights", he explained.

Asked about the initiative of closer economic co-operation in the Western Balkans through the removal of obstacles, he said that it was not a question of unification, because whenever unification is mentioned, some began to speak of Serbian hegemony.

In this respect, he said that Serbia would soon be the economic driving engine of the whole region, which is why it produces such a reaction.

He points out that it is important for the countries of the region to understand that they will benefit from it, for our people to understand that we are acting in a united front, because we will be so much more respected in Europe if we have common approach.

"The Visegrad Group, for example, can dismiss Timmermans and Weber at any time. The European Parliament may not accept Hungary's representative for the European Commission, but it cannot prevent the candidate from that country. Their strength is enormous, much greater, and we go to pick up the crumbs, attacking each other from the region, contenting ourselves with saying something bad to the big powers about the others, and the big ones then say that they will always keep our region wary so that they can do whatever they want and exploit all the wealth", he said.

Vucic called for a reduction in operating costs, to free up the state borders of off-road vehicles. According to him, it will not be easy to accomplish this, but there is an agreement between him, and the prime ministers of Albania and Northern Macedonia.

"We will launch this initiative in a fortnight, at a meeting in Serbia. I believe it is important. Then, we will go to Northern Macedonia, Albania and try to push it. Then we will try to involve Pristina and Bosnia-Herzegovina, and that would be something similar to 'CEFTA Plus, Plus'. If we achieve something, it would contribute to strengthening our economic performance, to represent the single market, which will lead to the attraction of a lot more investors, thus creating a more favorable atmosphere for future development", he said.

Asked about Donald Trump's reception, Vucic said a dinner he had towards the end of his visit was more interesting, but he could not reveal details from it. "I'm not really into receptions", he noted.