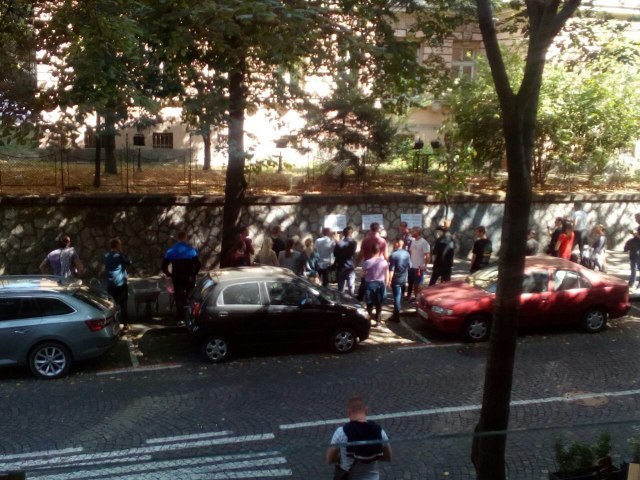 They point out that it is a continuation of the violence policy, which is the exact image of the Alliance for Serbia (SzS).

He also says that "Dragan Djilas is wrong if he thinks he will come again into the position to fill his personal accounts with another EUR 619 million, by using fascist methods."

The head of the SNS council group in the Belgrade City Hall, Aleksandar Mirkovic, says that "a ruthless and primitive way of political struggle", threats and lynching of political opponents as the only program and idea that drives the vandals, is the exact image of the Alliance for Serbia (SzS).

He says he is appalled by the level of violence and hatred that SzS's representatives have shown in front of the building where Vesic lives, adding that it is really outrageous to come to someone's home address and threaten his family, just because that person is not afraid to point out to Dragan Djilas' financial frauds.

SNS deputy head of the Belgrade City Hall Radoslav Marjanovic says that the arrival of SzS supporters in front of Vesic's apartment confirms that they have now resolved to deal directly and physically with political opponents, trying to limit their freedom of movement, and ultimately the freedom of political action.

Those attempts at primitive intimidation will not have any effect, Marjanovic said in a press release.

Aleksandar Markovic, Secretary of the Belgrade SNS City Council, strongly condemned the gathering of a group of Alliance for Serbia's supporters and stated that they had come to threaten him because "they only know to do that". "It is scandalous that they are prepared, for the sake of government and privileges, to even endanger the safety of the Vesic family", he said.

SNS City Council member Natasa Stanisavljevic says this is a continuation of the violence policy propagated by Djilas and his followers.

The chairman of the SNS Parliamentary Group in the Vracar Municipal Assembly, Uglješa Mrdić, agrees that what Djilas and his associates are doing is "monstrous and reckless".

In a statement delivered to Tanjug, he said he expects an effective response from the competent state authorities, and points out that all these "sick attacks are organized by those in charge of Belgrade, filling their pockets with loads of money at the expense of citizens".