President of Serbia, during a tour of the Morava district, stated that the war will not be over soon because both sides aspire to defeat the opponent.

President of Serbia, during a tour of the Morava district, stated that the war will not be over soon because both sides aspire to defeat the opponent. 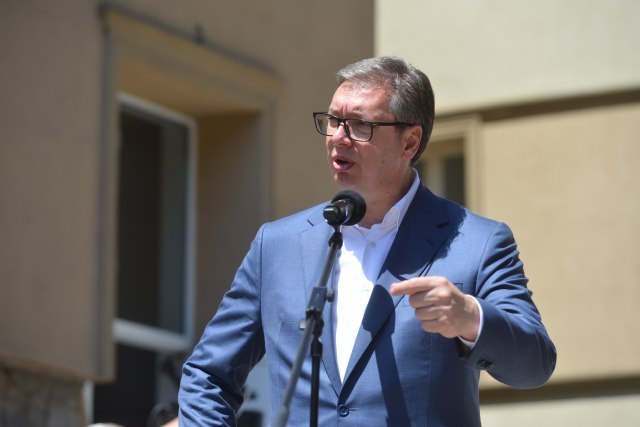 One side in the conflict expect that the latter will lose the war, and vice-versa, Aleksandar Vučić said during a tour of Ivanjica, adding that he knows that the war between Ukraine and Russia will not end soon. However, as he points out, we are keeping our peace.

"We will preserve peace and freedom and make our decisions independently and have a state that does not make decisions under pressure from anyone but in the interest of its citizens," he said.

Vučić first visited the village of Radaljevo and the family company for the production of seedlings, purchase and processing of berry fruits, Floriva.

"When I was a kid, I didn't like raspberries, but now I would eat them all the time. Wisdom comes with age, or the taste changes," the president laughed.

President had the opportunity to talk with the locals, who thanked him for everything he did for Ivanjica, first, while he was Prime Minister, and then the President.

Vučić then added that the state will give a lot of money for Ivanjica, Arilje, Kosjerić and Požega in order to fix the regional roads.

"I normally think that sewage is important, but wherever I've gone, people are just looking for roads. And there will be great progress when that's taken care of," said Vučić. The president then talked to the locals about the development of tourism on Mount Golija, pointing out that it is the most beautiful mountain and ski resort in Serbia.

Speaking about the reconstruction of the main street in Ivanjica, which has been waiting for 30 years to be fixed, Vučić promised that it will be fixed as soon as possible.

Before the tour, President also published a photo on his Instagram profile, in the description of which he said that he was visiting Ivanjica for the first time as the President of Serbia.

"I am very excited and look forward to everything we will do, not only for that municipality, but also for Arilje, Požega and Kosjerić. Work and making an additional effort always bring results!", Vučić wrote.

A little later, at 12:50 p.m., a visit to the village of Kumanica and a tour of the household of Vukašin Bogdanović is planned.

The presentation of the tourism development project in Golija is planned for 2:00 p.m.