As the war progresses, the situation on the eastern front, especially the alleged Ukrainian counter-offensive, is becoming more and more unclear.

As the war progresses, the situation on the eastern front, especially the alleged Ukrainian counter-offensive, is becoming more and more unclear. 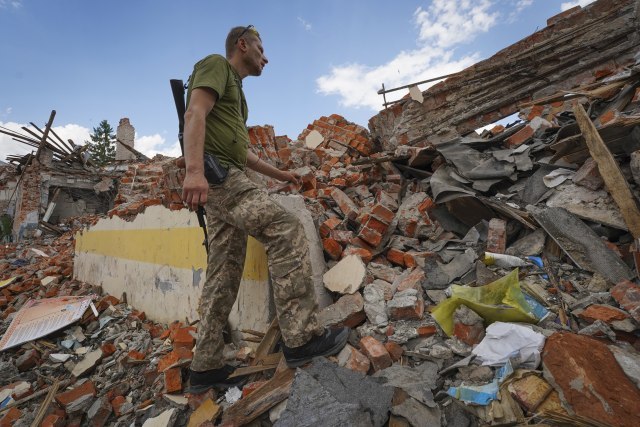 While Western politicians incite and convince the leadership in Kyiv that they can, and should, defeat the Russian army on the battlefield, completely different information is coming from the front.

The British newspaper "Independent" published an interview with Ukrainian soldiers who claim that the war in eastern Ukraine is "hell on earth." They said that their main problem was that they could not raise their heads from the trenches because of the intense artillery fire of the Russian army. In addition, Ukrainian units do not have enough ammunition.

From the statements of the Ukrainian soldiers, it can be seen that many more people are being killed than they are announcing in Kyiv. They could transfer the wounded only at night, when the enemy's artillery fire died down.

And while the soldiers talk openly about hell on earth, in Kyiv they still spread optimism. The head of the main administration of the Ukrainian military intelligence service, Kyrylo Budanov, said that their units will have their first significant victories already in August.

Budanov categorically claims that the Ukrainian army will come to the borders with Russia that were in 1991. According to Budanov, the war will end next year. How Kyiv is planning to launch a powerful counter-offensive in August with a morally broken army is difficult to explain.

Even if the West soon gives them long-range artillery, it is not enough to break through the front line. Even if the Western countries wanted to, Ukraine cannot get as many tanks as it needs until August to be able to wage an offensive war against Russia. Of course, such losses reflect on the morale of the Ukrainian army.

The leadership in Kyiv can mobilize reservists and inexperienced young men who objectively cannot fight with the Russian professional army. President of Ukraine, Volodymyr Zelensky, has publicly argued with those in the West who say that Ukraine should make territorial concessions to the Russians and thus conclude peace.

"We managed to silence those who said that we should agree with the Russians on territorial concessions. We will protect our territorial sovereignty and we do not want to give any territories," said the Minister of Foreign Affairs of Ukraine, Dmytro Kuleba.

Kyiv: How come they are allowed to do that and we are not?

NATO Secretary General Jens Stoltenberg said yesterday, after the signing ceremony of the protocol on the accession of Sweden and Finland to the Alliance, that those two countries will make a strong and important contribution to that military alliance. He said that it is a historic day for Sweden, Finland and NATO, for Euro-Atlantic security.

As he said, "Russia's brutal invasion of Ukraine" violated the peace in Europe, and that is why it is important that everyone "stand together at this dangerous moment in our history." As he said, the accession protocols signed today must be ratified in 30 national parliaments. He also pointed out that this is the fastest accession process in the history of NATO, because only seven weeks passed from the submission of the application to the signing of the accession protocols.

"President Putin tried to close NATO's doors, we are now showing that NATO's doors remain open, inviting two close and highly valued partners, Finland and Sweden, to full membership", he said. Reacting to the news about new NATO members, Kremlin spokesman Dmitry Peskov said that the Russian Ministry of Defense has plans for the country's security if NATO expands. "Such options are being considered, and this is not being done by the Kremlin, but by the Ministry of Defense," Peskov said. Minister of Foreign Affairs of Ukraine, Dmytro Kuleba, asked the West to answer how Finland and Sweden can become NATO members, and Ukraine cannot. Moscow political science professor Alexander Gusev says there are four main reasons why Ukraine cannot become a member of that military bloc now. The first is that NATO does not want to enter into an open war with Russia. The second is that joining NATO would cause a general security crisis in Europe. Third, about 40 percent of Ukrainian citizens are against joining NATO. The fourth reason is that Ukraine does not meet NATO standards.

Professor Gusev points out that leading European countries are not in favor of Ukraine joining NATO. All this is causing a revolt in Kyiv and the feeling that the West has drawn them into a war against Russia, which day by day is occupying new Ukrainian territories.