War could have broken out in Kosovo and Metohija; Incident at the SC session VIDEO

NEW YORK -- A session at which the incident took place is underway in the United Nations Security Council.

War could have broken out in Kosovo and Metohija; Incident at the SC session VIDEO

NEW YORK -- A session at which the incident took place is underway in the United Nations Security Council. 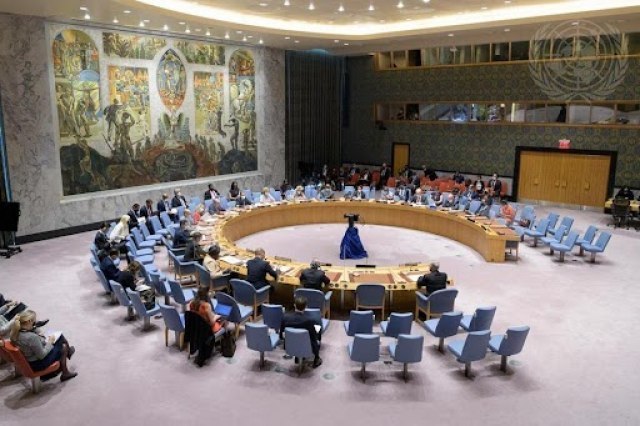 She said at the session of the UN Security Council that it was time to "end" the United Nations mission in Kosovo and Metohija, and called on the international community to "accept" the so-called Kosovo into international organizations. When it comes to the Community of Serbian Municipalities, which was not formed, Vjosa Osmani tried to find an excuse in the fact that the Pristina Constitutional Court determined that the Brussels Agreement was in conflict with the Constitution.

When it comes to the recent actions of the Kosovo Police, Vjosa Osmani said that the fight against organized crime is not the subject of negotiations. The president of the interim institutions in Pristina, Vjosa Osmani, and members of her team appeared with the symbols of the so-called Kosovo at today's session of the United Nations Security Council on the situation in Kosovo and Metohija.

Vjosa Osmani hung a badge with the so-called Kosovo, while one of the members of her team put on a black mask with the flag of Kosovo.

The Serbian delegation at the UN Security Council session is led by Foreign Minister Nikola Selakovic.

The Mission of Serbia to the UN lodged a protest against the symbols of the so-called Kosovo on the masks of the President of the Provisional Institutions of Pristina, Vjosa Osmani, and members of the Pristina delegation.

Serbia is committed to keeping the work of the United Nations Mission in Kosovo and Metohija unabated, with the goal of building and preserving lasting peace, stability and security in the province, Serbian Foreign Minister Nikola Selakovic said today at a session of the UN Security Council.

"We believe that an international presence in Kosovo and Metohija, in accordance with UN Security Council Resolution 1244, is still necessary. In addition to UNMIK, the presence of KFOR as the main guarantor of security and EULEX is also important due to its engagement in the field of the rule of law", Selakovic said at the session...

He pointed out that Serbia, as a state committed to respecting international law and a member of the United Nations, opposes any attempt to establish an artificial balance between the parties in the dialogue, as well as the relativisation of responsibility for unilateral acts.

"We indignantly reject all attempts to call for so-called 'reciprocity' and 'recognition' to actually block the dialogue and divert attention from the fact that the provisional institutions of self-government in Pristina are not fulfilling the agreements and obligations under the EU-sponsored dialogue. We note with concern that more than eight years after reaching the Brussels Agreement, the establishment of the Community of Serbian Municipalities has not been initiated, although Belgrade has fulfilled all its obligations from that agreement", Selaković pointed out.

He pointed out that the fact that the security situation in Kosovo and Metohija in the past period was marked by an increasing number of various ethnically motivated attacks and incidents directed against Serbs, which was also stated in the Report, caused great regret and concern; that the Provisional Institutions of Self-Government in Pristina continue to take unilateral steps and refuse to implement the agreements reached in the Brussels dialogue.

He added that institutional discrimination against Serbs, attacks on the facilities of the Serbian Orthodox Church and undermining the economic sustainability of Serb communities in the province continue.

He reminded of the events that are not included in the reporting period of the latest report of the UN Secretary General on the work of UNMIK, but he referred to them so that everyone would understand how dramatic the situation on the ground is and how serious the consequences of Pristina's unilateral actions can be.

Our team is getting ready for a regular session of the #UN Security Council on the report of the UN Secretary General @antonioguterres on the work of @UNMIKosovo. pic.twitter.com/desqFvobjs

Tanin: "War could have broken out"

UN Secretary-General Antonio Guterres' Special Envoy and UNMIK chief Zahir Tanin said today that the lack of political understanding had led to recent escalations of tensions in Kosovo and Metohija, stressing that the Open Balkans Initiative, encouraged by Serbian President Aleksandar Vucic, was a promising step despite disagreements.

He said at the session of the Security Council at which the UNMIK report on the situation in KIM is being discussed, that what was seen recently in KIM could have led to war.

"As Borrell said, unilateral and uncoordinated actions that threaten stability are unacceptable. Problems must be resolved within the EU-mediated dialogue. Recent actions have deepened the gap in the north and led to strong reactions in Belgrade and made a return to dialogue urgent", said Tanin.

Tanin said he was involved in talks with all parties, especially at the UN, as well as with the KFOR commander and EU representatives.

"The EU should boost dialogue, but history in the region is constantly repeating itself and there are small incidents that have triggered an unstable environment. I emphasize the importance of the ongoing dialogue between Vučić and Kurti. This is a challenge for EU institutions, but what I have noticed with representatives of the international community is that despite disagreements, there is no alternative to sustainable dialogue. It is important to support all initiatives that can help boost relations", said Tanin.

He reminded of the recent escalation of tensions in KIM, on September 20 at the Brnjak and Jarinje crossings around the registration plates, as well as on October 13, when the authorities in Pristina allegedly carried out an action against smuggling. As he said, it was noticed that there is no communication, as well as that priority is not given to maintaining a safe and peaceful environment.

"I give my vote against unilateral actions and for responsible leadership. Trust in negotiations is the most important element and trust in the institutions in charge. As local elections approach, it is necessary to meet people's high expectations for change. What the people are looking for is responsible government, including responsible implementation of reforms. Moreover, they want public institutions to work for the well-being of the people and they want greater equality, reliability and justice", Tanin said.

He said that he talked with Kurti, who assured him of his commitment to reforms, as well as that he advised him to dedicate himself to rebuilding the trust that was violated in KIM and to dedicate himself to the dialogue between Belgrade and Pristina", Tanin said. As he emphasized, a mature and responsible approach to the problem and the past is necessary, and added that nationalist statements that serve to collect political points should be avoided.

"The Open Balkans initiative encouraged by Vucic is a promising step despite disagreements. The pandemic continues to be a great challenge for KIM and the region, and it is important to mitigate the socio-economic consequences," Tanin concluded.