Vučić: They want to make Milošević out of me; There will be no recognition of Kosovo

BELGRADE -- President of Serbia, Aleksandar Vučić, made it clear that, during his term of office, there will be no recognition of Kosovo until the elections in 2022.

Vučić: They want to make Milošević out of me; There will be no recognition of Kosovo

BELGRADE -- President of Serbia, Aleksandar Vučić, made it clear that, during his term of office, there will be no recognition of Kosovo until the elections in 2022. 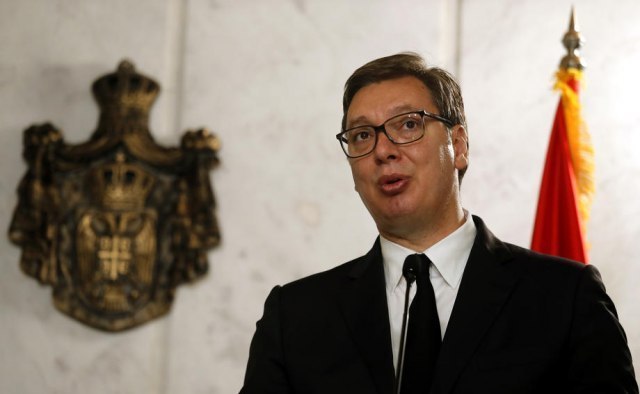 He stated that he would not change that position.

"I don't know what should happen, for that to changes. We did our best. We pursued a smart policy, we saved Serbia from the conflict, without playing heroes, we saved the lives of those who want to stay in Kosovo and Metohija. We invested in their survival, without endangering peace. I know thousands of people who can hardly wait for some new conflict and would find countless reasons for justice and fairness in it. And if they were asked if their brother or child would return in the coffin tomorrow, that's another story", Vucic told Vecernje Novosti.

"We pursued a difficult policy, Serbian policy, protected national interests and took care not to enter into a conflict with the whole world and not to have any armed conflict. Not because we are weaker, but because it is not necessary. Serbia needs progress", Vucic said.

The President of Serbia points out that "it is difficult to talk to Albanians". "All you see is a campaign on a daily basis against Serbs, Serbia and its president. Serbs would be good if they recognized Kosovo's independence, and only a day later there would be demands for war damages, two days later it would be: admit you committed genocide, and then you realize that you are talking to people who do not want to convince you that we can do something together", Vucic said. All their conversations, he pointed out, come down to "mutual recognition", and I told them 100 times that I was not interested in that.

"What did Serbia gain from that? There must be a change of consciousness in their leadership, such as pressure from the EU is needed to fulfill what was signed, as the EU is the guarantor," Vucic said, adding that until that is fulfilled, he does not believe that anyone will have great confidence in the credibility of the negotiations, in the seriousness, responsibility and possible delivery of any more serious results.

Asked whether he feared the strengthening of the Berlin-Washington axis after the victory of Joe Biden and whether they would be on the line: either the recognition of Kosovo or no EU accession, the president said:

"That was their line before and I have no doubt that it will be more pronounced now. Again, I must say that I had a very good conversation with President (of France) Emmanuel Macron and a fair conversation with Chancellor (Angela) Merkel. We do not have an easy day ahead of us, but it won't be the first time".

Vučić reminds that in the previous eight years, we have not had a pogrom or persecution of our people anywhere.

"On the other hand, Kosovo was put under an act before that, especially after the verdict of the International Court of Justice, and after that the border crossings were set up at Jarinje and Brnjak. Then someone managed to bring the whole story back to the international scene. During which reign did 90 countries recognize the independence of Kosovo or during whose term of office did 18 countries withdraw their recognition? When were the salaries increased by almost 60 percent? When did Serbia have a stable exchange rate for the euro for eight years? When did we build more highways, railways... Serbia has changed a lot. The Germans say: the scoreboard shows clear results," Vucic emphasized.

"They want to make Milosevic out of me"

The President of Serbia, Aleksandar Vučić, says that he believes in the competent bodies and internal control in the Ministry of the Interior, due to the fact that he was wiretapped for more than a year, stating that "they want to make Slobodan Milošević out of him at any cost".

"Some people I usually discuss football with, literally about who kicks the ball, are marked to have connections to drugs, so that they could be under surveillance, and in fact my conversations with them were eavesdropped on. These people, of course, have nothing to do with drug trafficking, nor is there an indictment issued for them", Vucic explained to Vecernje Novosti. "Those who participated in this work used this method to pretend to legally cover themselves, but they committed major fouls. There is evidence and witnesses can confirm that this was not registered and was archived probably so they could blackmail someone", Vucic said.

To the speculations that people from the top of the government were involved in this affair, he responds:

"We will find out everything. Let the state authorities investigate it. The laws must be respected and I am convinced that everyone involved will have to answer. As a person, I try to understand everyone's urges. I even often understand the urge to impose laws so that you can achieve your dirty goals, not because I start from myself, but because I also understand the weaker human sides and that someone may think they can do anything, but when you listen to the president or, as some would say, "catch him", then you have to inform him about it immediately and remove it from the archive, and not archive something for a year and a half," said Vucic.

The president added that "no one has the right to archive the talks of the president of Serbia."

"Secondly, those information leaked because there were honorable policemen who brought it to me. They also recorded my conversations with my father and my son... They looked for people with whom I could be in contact in order to 'catch' me. I will not go into the reasons for which everything was done. I do not think that this is the biggest problem of Serbia, it shows that some people do not understand what the state is", said Vucic.

The President of Serbia points out that "when you start linking all the events" who and how asked someone to speak against him and his family, "then you realize that there is a wider political context."

"These are stories like the one that Andrej Vučić bought the restaurant Franš and that he owes hectares and hectares of land in Vojvodina, and in the end, not a single acre, not a restaurant, not a bakery. For all that, it takes time for the people to realize that those are false claims, but someone did it on purpose, with the aim of ruining me politically, drawing parallels with the late President Milosevic at all costs, where there are none, all of which, however, must not distract you from what is your job and therefore I react much more calmly than most people. In time, everything comes to its own", President Vučić pointed out.

He believes that Serbia is not a "broken country" because someone is eavesdropping on the head of state. "I think that we are one of the few countries that has not been destroyed in that sense. I am sure that Serbia is much stronger in that respect than most countries in our environment, even some that are in the EU and de facto do not have their own security system. "It is easy to resist various external influences, because at some point everyone becomes a politician and makes deals. I have no doubt that part of the foreign factor is also involved. But I do not want to blame foreigners, when our people got involved in the first place, however, we'll resolve the whole thing", Vucic concluded.