Brnabic re: information on a larger number of dead: "We didn't hide data at any time"

BELGRADE -- Prime Minister Ana Brnabic rejected as inaccurate and frivolous unofficial information that there's larger number of dead than it is being announced.

Brnabic re: information on a larger number of dead: "We didn't hide data at any time"

BELGRADE -- Prime Minister Ana Brnabic rejected as inaccurate and frivolous unofficial information that there's larger number of dead than it is being announced. 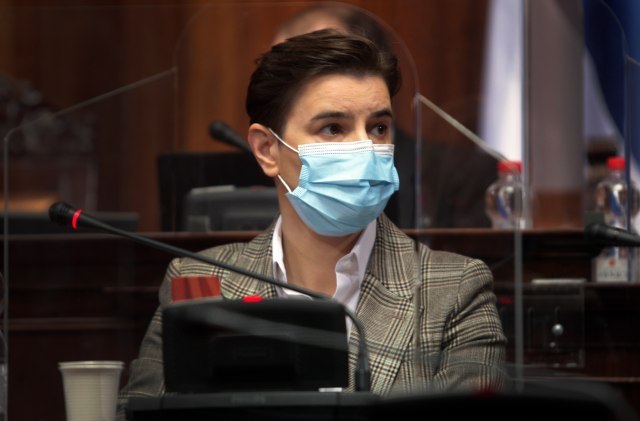 "At no time did the state hide any data on those infected and deceased in Serbia from the coronavirus," she said.

She answered a question from a BIRN reporter commenting on the fact that when they asked Batut Institute for the exact number of deaths caused by coronavirus, that they needed 30 days and why it could not be obtained automatically immediately from the COVID-19 website, as well as the fact that unofficial stories are coming from different parts of Serbia that a larger number of people have died than is being announced.

As for Batut's answer, Brnabic said that they probably said so in that institute because maybe the legal deadline is 30 days to check everything, as well as they should ask Batut directly for the answer.

"It is a serious accusation. We did not hide any information from anyone, not only since the first case was registered, but also before that. We get that information, the government and the crisis staff directly from hospitals, and who suspects the death toll directly brings into question medical workers because we get data from them", Brnabic pointed out.

She adds that she personally would not dare to accuse medical workers of hiding the data on how many people died of coronavirus, since it is a fierce accusation.

Brnabic points out that we saw the same information when there were floods in 2014, when there were stories that there were thousands of dead, however, no evidence appeared afterwards nor did the families of those people who allegedly disappeared in floods come forward.

"I would ask that we avoid the conspiracy theories, we did not hide anything at any time," Brnabic pointed out, adding that everyone can get data on the number of deaths caused by COVID-19 website on a daily basis.

She warned that such accusations bring into question the work of our health care system and that it is not clear to her who those who make such allegations refer.

Brnabic pointed out that it had been announced that 235 people had died so far and stated that this was not a small number, as well as that, if they wanted to hide something, they would certainly register a smaller death rate.

She added that all these accusations were frivolous and terrible and did not contribute to our collective fight against COVID-19.

She said that those who claim that the data on the dead were reduced should refer to some source, since these are serious allegations.