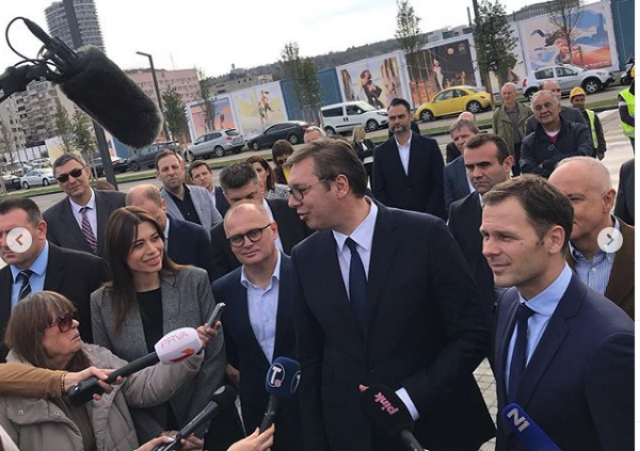 According to Belgrade Waterfront, the park will spread over an area of 2.7 hectares and its first part, its size being 1.8 hectares, was opened today.

"Everyone who comes here will be able to see the most beautiful park in this part of Europe and new buildings. In a short time, we will have over one million square feet of built up area here, as well as office and residential space", Serbian President Aleksandar Vucic said at the opening ceremony.

According to him, in this way Belgrade gets the most modern and up-to-date part of the city, everything that the big metropolises have, which we did not have, is now arriving in our capital. "Only 27 percent of people initially supported this project, even though it was the ugliest part of town. This proves that with the overwhelming will and effort of people who believed in the vision, dreams can come true and a miracle, as people comment, can happen. It is a miracle", Vucic said.

"Boulevard should be finished till March and it will lead directly to the Belgrade Fair. I reckon that most works on the shopping mall will be completed by then, that 15-16 floors will be constructed of the tower, which will be a 'landmark' of Belgrade. This attracts tourists and it is not a matter of taste but of an objective approach, because when you look at the numbers, there are now twice as many tourists coming, compared to the period six or seven years ago", Serbian President concluded.

He added that this would be the tallest building in this part of Europe, as well as one of the most beautifully designed construction. "The construction industry, along with the manufacturing industry, are those that boost our growth, and Serbia is the second country within Europe in terms of GDP growth in Q3 of 2019", he said.

The park also includes a multifunctional sports ground, a children's playground, picnic tables and table tennis tables, as well as a walking and jogging track.

The first part of Nikolai Kravtsov Street, which will connect Savska Street and Woodrow Wilson Boulevard, has also been opened on the Belgrade Waterfront. Kravtsov was a famous Soviet soldier from World War II who, with his courage and selflessness, made an immense contribution to the liberation of Belgrade in October 1944. The initiative for the name of this street was also submitted by President Vucic, to be recently adopted by city councilors.

Serbia behind Hungary, second in Europe in terms of GDP growth

Serbian President said today that Serbia is in the second place in Europe in terms of GDP growth in Q3 of 2019, which is reflecting in an increase in wages.

In a statement to the press, Vucic said that data is still missing for seven countries, but that those certainly have not had higher GDP growth than Serbia.

"Serbia is behind Hungary, whose growth in the third quarter amounted to 4.8 percent, while ours amounted to 4.7 percent. Poland and Lithuania had 4.1 and 4.2 percent of growth respectively", he said.

Vucic says National Bank's projection for GDP growth this year has increased from 3.5 percent to 3.6 percent.

"We expect GDP growth to reach at least 3.8 percent this year, but Mrs. Jorgovanka Tabakovic (Governor of the Serbian Central Bank) is always conservative in her projections", Vucic said, adding that he expects that Serbia will take over leading position in Europe in the last quarter, in terms of GDP growth.

He stressed that these data represent best proof of the good progress of Serbian economy.

He said that the economy has made the fastest progress for the last six months, while the citizens will feel it in their pockets.

"After paying out one-time assistance to pensioners, in the amount of RSD 5.000, they can expect increase of their pensions, and they are the most deserving for the success of the reforms in the field of economy. On December 10, workers will receive major increase in their November wages", he added.

After that, Vucic said, we will make efforts to apply economic growth to the minimum wage as well.

"I am satisfied, as the numbers best describe our progress", Vucic concluded.