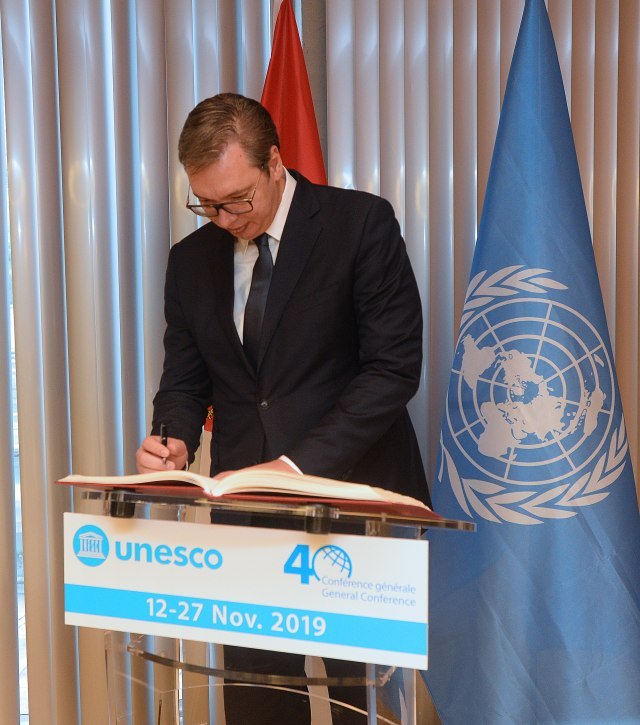 Serbian President Aleksandar Vucic stated today in Paris that mini Schengen initiative is worthy of attention, recalling the World Bank estimate that its implementation would save the Western Balkans countries (WB6) with 3.5 billion euros.

"Extremists, both Albanian and Serbian, and whatever you like, resent anything that brings people together, they resent anything that brings peace, stability and development. They would like to enjoy the stale water and stagnation, where there is no progress", the President told Serbian journalists in Paris and regretted the fact that it is quite difficult to talk to people with no vision.

Vucic noted that the other thing, when it comes to the initiative, is whether all the countries will be able to withstand that amount of pressure.

To those from Montenegro who claim to have already liaised in the region, he said they have not done so when Serbia is concerned.

"You hadn't 'liaised' with us. Maybe with some other country in the Western Balkans you did, but not with Serbia. We don't have fast-track lines for trucks, so our trucks spend 100 hours at the border crossings, waiting, and I will remind you that World Bank estimated that Western Balkans countries (WB6) would save 3.5 billion euros if we were able to implement this initiative and put it in effect", Vucic told reporters in Paris after addressing the 40th UNESCO General Conference.

The President regretted that he could not talk or achieve serious results with people who, as he said, had no vision, did not understand anything, and the main purpose of their existence comes down to cursing, hitting or drawing graffiti on the theater building.

Vucic said all this at the request of journalists to comment on the estimates that "Mini Schengen" represents the creation of a Greater Albania, and added that the answer could be given only to the well-intentioned people, but not to those "who beat women in front of Pink, like the members of movement Dveri".

"How we plan to establish Greater Albania by making more lanes that our trucks can go through, that we can travel only with IDs, that we won't have to issue special work permits", the President inquired.

He asked those opposed to the initiative how they imagine Serbian economy to grow further.

Vucic said that some people have lied that it is an initiative showing that we only care about Albanian tomatoes, although it is quite the opposite, because we care about Serbian tomatoes, ketchup, ajvar, ljutenica and pindjur (different local relishes made principally with red bell peppers, eggplant, garlic and chili pepper, predominantly popular in the Western Balkans).

The President said it was good that there were those among the opposition who praised the initiative, because it showed that they had a good understanding of the message that people sent to them, because according to the latest surveys, all of them together barely crossed the threshold.

"People will not support a policy that resents highways and road construction, all those construction works seem to bother them, as well as when we make effort to connect people. When you ask them what's wrong, they don't know what to say - when you build a highway to Pristina, they say it's a highway to Greater Albania. Actually, this is a road that will take the Serbs from Gracanica to Prokuplje in less than an hour", Vucic concluded.