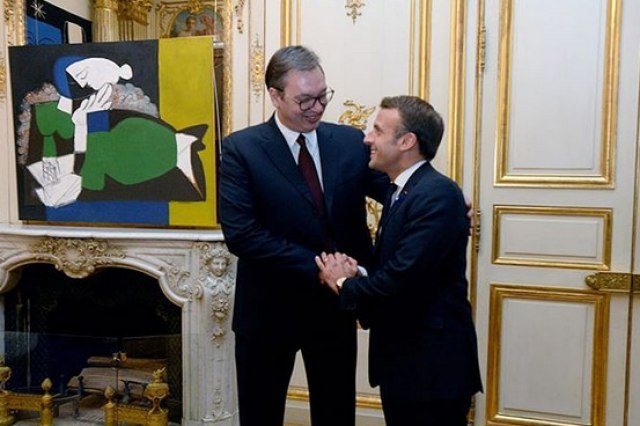 Vucic said in Paris last night that the initiative to remove barriers to the free movement of goods, services, capital and people between Serbia, North Macedonia and Albania is more significant than withdrawing Kosovo's recognition.

Asked if he had received support for "mini Schengen" from Macron and if he expected to face with pressure regarding this initiative, Vucic replied that he would not call the initiative by that name, although it has already come into daily use, since it annoys some people, and because of its geographical determinant.

"No one can say that the initiative may bother anyone because there is no rational reason for it. The initiative was supported by the US and Macron will publicly support it. But some countries will be told to say they are against it, they will find a reason for it, because they had realized that we were taking our destiny into our own hands by solving our own problems”, he explained.

"I see that I cannot explain even to the members of my family the importance of the initiative. The older son thinks that it is more significant to withdraw recognition of Kosovo's independence, and that is nowhere near that", he said.

Vucic also thanked Ghana for the decision to withdraw recognition, noting that the country is a great partner of Serbia.

"However, withdrawing recognition helps us achieve our tactical position, which will not drastically change the overall situation, but this changes the future of all of us. It is crucial for all of us", he stressed, hoping that everyone would have the political strength to protect their independent decision-making.

He said the initiative would contribute to reducing departure of the citizens from the respective countries, and a greater percentage of those who return.

"Those who criticize this initiative need to know that Serbia is getting a lot out of it. Within the region, with all the countries we border on, with the exception of one, namely Hungary, Serbia has a trade surplus. Everyone would see that the initiative suits Serbia the most, because Serbia is the one that is the most powerful, capable of selling more goods and services, being the most powerful in human resources", he said.

Vucic said that much hope is placed in this initiative, because it changes the future, although smaller countries will receive more in the short term.

He also said that the initiative solves the problems of labor shortages, because we do not have enough welders, butchers, carpenters, locksmiths, who are in high demand.