Merkel on resolving Kosovo issue, Brnabic on the only point of disagreement

Merkel on resolving Kosovo issue, Brnabic on the only point of disagreement 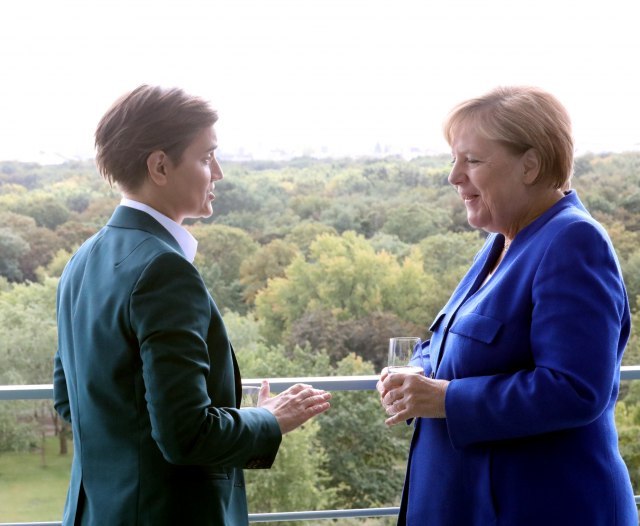 German Chancellor Angela Merkel said today after meeting with Serbian Prime Minister Ana Brnabic that the process of solving the problems of Kosovo and Metohija should be continued and further improved in order to reach a solution.

She said at a press conference that she discussed with Brnabic the situation in the region, along with cooperation opportunities, and stressed that she was glad that the Berlin Process has proven to be very useful and has led to great opportunities and activities in view of enhancing cooperation.

Merkel stressed that there is good bilateral cooperation between the two countries and that there are 400 German companies with 60,000 workers operating in Serbia, while Germany presents a significant trading partner of Serbia.

"We have very close relations and I would like to emphasize that Prime Minister Brnabic is not dedicated only to combating unemployment and to the growth of Serbia's economy and a digital transformation," said Merkel, adding that Serbia is leading the way in digitization, which is a good signal to young people.

It's a good investment in the future, German Chancellor added.

She said that they also discussed civil society, the judiciary and the difficulties in that area, as well as constitutional reforms.

"I see the will to improve things and this is closely related to the progress in the EU accession process," said Merkel, pointing out that Serbia has made quite a breakthrough, and that quite a lot has been done when it comes to opening negotiation chapters.

She said that Germany as a partner will continue to support Serbia's development and further strengthening German-Serbian relations and cooperation.

When asked whether Berlin and EU had any deadline in mind for reaching Belgrade-Pristina agreement and whether the indicative date for Serbia's EU accession - 2025 is still realistic, as Jean-Claude Juncker said, Merkel stated that there are no set deadlines, sending a message: the sooner, the better.

"There are no deadlines for finalizing certain issues, but the sooner the better", Merkel said.

She says her message to anyone who wants to become EU member is that it sometimes takes a little longer, sometimes less, and that there is no limit or restriction.

Merkel stressed that the EU wants to maintain momentum in the reforms and "that it should be known that prior to the accession, certain things regarding Kosovo need to be resolved."

"As for 2025, I am not in favor of setting on some dates and times, but rather that all candidate countries become eligible for accession, while the preconditions are very clear", the chancellor said.

She added that certain reforms must be implemented within the EU as well, and that EU accession can only be discussed if Serbia meets the conditions.

When it comes to EU integration, the prime minister said this remains Serbia's primary path, and that she today asked the German chancellor for support. "We know what we need to do to accelerate that path. We spoke today about how far we have come and what more we should do," Brnabic said.

The German chancellor stated today she could not say anything about information that has emerged that Germany and France could appoint a special envoy for the Belgrade-Pristina dialogue.

Merkel said that Germany and France have tried, and are still trying, to restart that dialogue, as well as to do something about the taxes Pristina has introduced on products from central Serbia.

She recalled that the process has been interrupted and underlined that the resumption of the dialogue would be discussed again after the Kosovo elections.

"So far, it hasn't been possible to establish dialogue because of the imposed tariffs", Merkel said.

The prime minister of Serbia said in Berlin today that the Kosovo-Metohija issue is the only point of misunderstanding and disagreement between Serbia and Germany, but that it's important to discuss this topic, because without a long-term sustainable solution to this problem and without reconciliation between Serbs and Albanians, there won't be a better future for the Balkans.

"The issue of Kosovo and Metohija is certainly the only point of disagreement and misunderstanding, but still, Germany is one of the most important partners for Serbia, and as much as we may disagree on some issues, the most important thing is to talk to Germany, to hear their opinion and advice, to present our position and to see if together we can bring our positions closer and come up with a long-term sustainable solution", said Brnabic.

Serbia's Prime Minister stressed that without reaching such a solution and a historical reconciliation between Serbs and Albanians, there would not be better future for the Balkans.

Brnabic pointed out that it was, first and foremost, important for the sake of young people, and said that everyone should work together, with the support of Germany, the EU, and other international partners.

"I know that we can build a more beatuful, better and more prosperous Balkan for everyone", Brnabic said at a joint press conference after her meeting with Merkel.