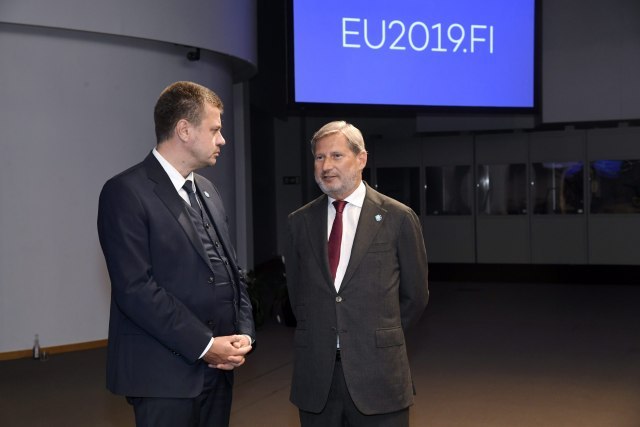 "The abolition of the imposed tariffs is crucial", Hahn said.

He underlined the importance of reaching agreement between Belgrade and Pristina on the meeting of the Foreign Affairs ministers of EU and Western Balkans.

"Reaching solution, and a positive outcome of the Serbia-Kosovo dialogue is a key element for the future European perspective of the whole region”, Hahn said.

Hahn had once again urged Pristina authorities to remove taxes imposed on the import of Serbian goods. "This is a vital issue as the tariffs' imposition is not in the spirit of European Union. When we talk about the joint market, it does not allow any kind of taxes or customs. This had to be done", Hahn said.

He added that Serbia had to stop with launching initiatives for Kosovo's recognition withdrawals that is being done worldwide. "Both sides should make efforts. I believe that we can find a solution and that it is not an impossible mission", Hahn concluded.

European Commissioner reiterated that Kosovo is facing with an early elections and assessed that "the situation will become clearer" after the elections. "Together with the new EU staff members, I am confident that we can bring negotiations to the final stage", Hahn concluded.