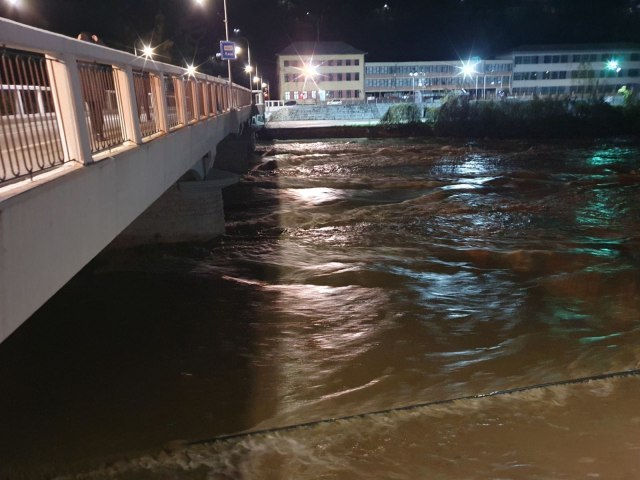 Sports grounds were flooded in Brodarevo, and the water threatens the Fire Station, in Ivanje water spilled onto the local road that runs along the coast, while in Zalug agricultural land was flooded. Due to the very unfavorable current situation, the Headquarters for Emergency Situations had an urgent meeting yesterday.

"Tonight, at the staff meeting, we made a decision to prohibit the passage over the suspension bridge until the water level of Lim returns to the permitted limits. We have forbidden access to the ORSI sports grounds. Passing on the local road along the banks of the river Lim in the Municipality of Ivanje is prohibited, and the water level of Lim will be monitored on the main road in Strugovi.

In Šarampovo, the installation of flood defense impediments will continue, and in Brodarevo, the situation around the fire station will be monitored," the mayor of the municipality told RINA yesterday.

Vladimir Babić after the session of the Headquarters for Emergency Situations added that the water level of the Lim River is rising hour by hour, and what is even more worrying is the rain that is falling again in Prijepolje, but also in the municipalities of the north of Montenegro, where a large amount of water comes from.

On the Danube, water levels are around and slightly below low navigation levels, according to the RHMZ website.