Novak: It was just a matter of time

Serbian No.1 Seed, Novak Djokovic, analyzed the match against Jannik Sinner in the Wimbledon quarterfinals.

Novak: It was just a matter of time

Serbian No.1 Seed, Novak Djokovic, analyzed the match against Jannik Sinner in the Wimbledon quarterfinals. 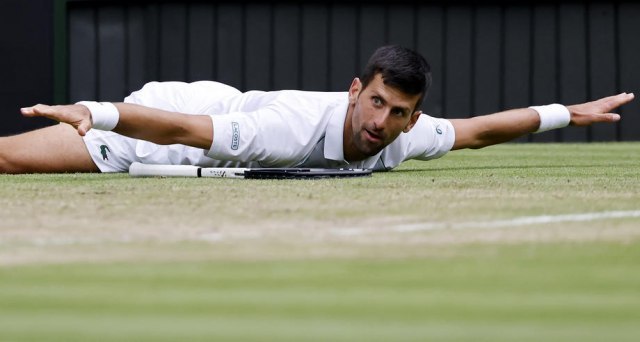 He reached the victory after being two sets down and a big comeback.

“From the start of the third set, I played three really very solid, very high-quality tennis sets,” he said simply. “From the very beginning of the third when I broke his serve early, I felt that I found my rhythm and tempo on the shots", Novak said.

“It was two different kind of matches before and after the break and I felt completely different from the start of the third.”

After the match, Djokovic said on the on-court interview that between the second and third set, he talked to his reflection in the mirror in the locker room. He says it was not an "aggressive" conversation.

“It was just a pep talk, positive talk,” he explained. “As negative and down you feel on yourself in those moments, even though as fake as it looks or sounds to you, it really gives you an effect and support if you are trying to find the right and positive affirmations and tell it to yourself and kind of reanimate yourself in a way", Novak was straightforward.

“I just felt like I had to change something. I was not playing well, I was not feeling well on the court, I was dominated by Sinner. Thankfully Grand Slams are played in best-of-five, so I had opportunity to come back.”

As Djokovic admitted, "the ploy does not always work – but for me, it quite often does. I did the same thing in the Roland-Garros final last summer – I was two sets down to Stefanos Tsitsipas at the time – and I ended up holding the trophy by the end of the afternoon".

Novak was asked at the press conference what happened in the first two sets, which Sinner won.

"I started doubting my shots, I was too passive”, Novak said. “My opponent started believing in himself more. He just had a better, I guess, mentality on the court. He had confidence to step in and dictate the play".

"For the first two sets, comparing to the last three, we probably had two different matches. He was the better player for two sets", Djokovic started.

"As negative and down you feel on yourself in those moments, even though as fake as it looks or sounds to you, it really gives you an effect and support. A little break and a little pep talk and try to recuperate and regather the thoughts, and reassemble everything that you have, and come at your opponent with the best possible game", Novak explained.

"I was fortunate to start the third set very well. I broke his serve early in the set and I think that has given me a confidence boost. I saw a little bit of doubt in his game, in his movement, and I guess the experience of playing on this stage for many matches helped me a little bit to deal and cope with the pressure."

Sinner's confidence appeared to take a hit and Djokovic was unrelenting heading into the fourth, quickly opening up a 4-0 lead before a deciding set was forced. From there, it only looked to be heading one way and Djokovic wasted little time in getting the job done, breaking Sinner twice to eventually win 5-7 2-6 6-3 6-2 6-2.