BELGRADE -- After meeting with the EU Special Representative for Belgrade-Pristina Dialogue, Miroslav Lajcak, Aleksandar Vucic said that Serbia is committed to dialogue.

BELGRADE -- After meeting with the EU Special Representative for Belgrade-Pristina Dialogue, Miroslav Lajcak, Aleksandar Vucic said that Serbia is committed to dialogue. 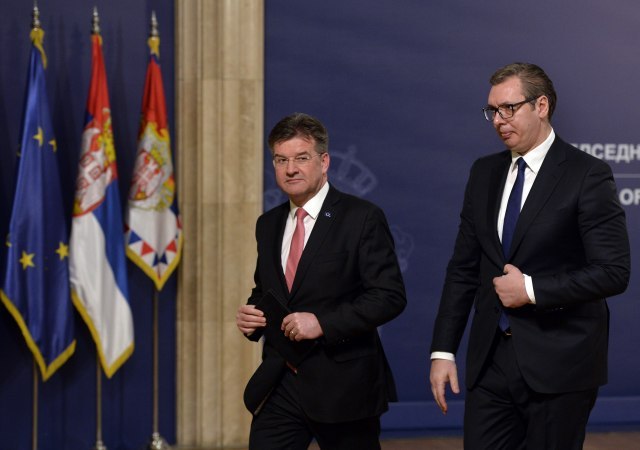 Vučić said that he had a good and meaningful conversation with Lajčák.

"Mr. Lajcak introduced me to the most important things in Pristina. Serbia is committed to dialogue with Pristina and is ready to continue the dialogue at any time when it is invited to Brussels. Second, Serbia supports Lajcak's activities and intentions to reach a solution through compromise policy. it meant dissatisfaction for both sides, but without an ultimatum and the imposition of a solution, Serbia participates to a great extent in negotiations and talks, but in the desire to have understanding for Serbia's interests as well", he said.

Lajcak said that his last visit to Serbia was five months ago, and that he would like to come more often.

"Unfortunately, the pandemic does not allow that. I started my visit to the region with a visit to Pristina. It was important for me to come immediately after the elections," he said. "Dialogue is key for both sides, in order to advance on the European path. The status quo is not good for either side," he said.

Lajcak said dialogue is key to progress on the road to the EU. "Member states expect the dialogue to continue constructively and in good faith. We have no interest in maintaining the status quo," he said.

According to him, agreements have been reached in 10 years, and they have been implemented to a greater extent.

Continuation of the dialogue in April or May

According to him, he believes that the Americans will leave the dialogue to the EU.

"They are people who created their child, made a cradle for their child, rocked it. A child has grown up to a teenager. The situation is all the more difficult for us. It is up to us to get as much as possible for our people," he said.

"In April or May, we can resume the dialogue, depending on Pristina," Vucic said.