BELGRADE -- President Vucic said in Sremska Raca where the 25th anniversary of the "Storm" operation is marked, that Serbia agrees to reconciliation, but not to humiliation

BELGRADE -- President Vucic said in Sremska Raca where the 25th anniversary of the "Storm" operation is marked, that Serbia agrees to reconciliation, but not to humiliation 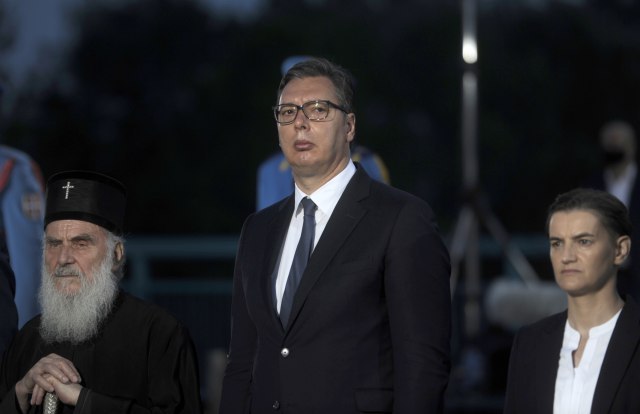 "Since 2014, Serbia and Srpska have been jointly celebrating Serbian suffering and I am proud of that. I am proud because they did not succeed to ban us from bearing a Serbian name and surname. I am proud because Serbs have a proud and independent state which can stand up in defence of Serbian graves, but also of our future", Vučić said.

Vucic emphasized that "Serbia lives and will not disappear."

"I told them that there will be no more 'Storms' because Serbia and Srpska will no longer quarrel," he said.

He said that no one can forbid us to mourn our victims.

He stated that the matrix "Serbs are to blame for everything" is ubiquitous and that it will be difficult to change.

"Serbs were exterminated only because they are Serbs. Serbs are to blame for everything. That matrix has been set and it will be difficult to change it today and tomorrow. We do not dream of changing the opinion of the world, we must discover all the horrors that Serbs experienced. Serbia will never have the mark of shame that was put on its forehead," he believes.

Vučić says that Serbia will never agree to humiliation.

"As for those who are silent about the most serious crimes... It is our job to tell them that we want reconciliation, peace, yes, but never humiliation. We have never forced you to admit genocide, which is obvious, just say 'that we know that an entire nation died in Jasenovac because they bore the Serbian name and surname", Vučić said.

He said that "Serbia is being lectured by those whose streets are named after Mile Budak", the Ustasha ideologue of the Independent State of Croatia who is the creator of the policy of "killing a third of Serbs, expelling a third and converting a third to Catholicism".

He also said that the number of Serbs in today's Croatia was reduced to a "statistical error", and that this was not only the result of genocide during the Second World War, but also of the pogrom of the 1990s.