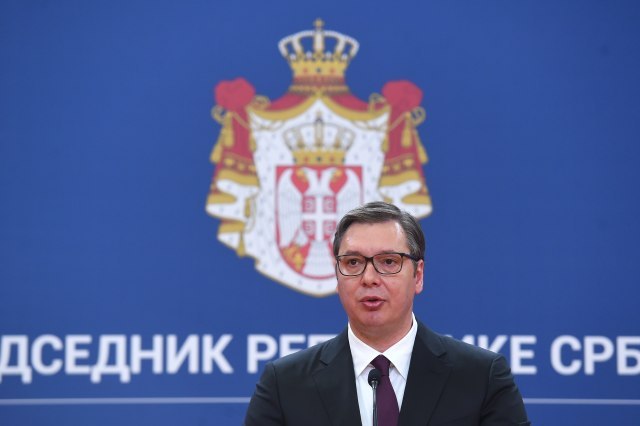 He pointed out, in response to the claims that "Serbia has gone through the worst and that most of them are infected in our country", that we have the most people tested on a daily basis, more than seven thousand of them.

"How do you think they have more infected when they have 1000 tested per day? We can now stop and test 300. We will not hide, we will not lie," he said.

He answered in the negative when asked if he saw the Albanian letter to Trump that "his policy is on the line of Serbia".

"I never underestimate the initiatives of the Albanians, this is a serious factor on the East Coast, in New York and Washington the third Prizren league formed in America cost us more than the first two. I don't think Trump is on our side, but I don't think he is a man who does not want to hear our side", Vucic said.

He also said that Albanian emigration is a serious problem for us in the political sense.

Vucic also commented on Thaci's statement that he dreams of Medvedja, Bujanovac and Presevo within the so-called Kosovo.

He subsequently denied allegations that he had received an offer to exchange 17 villages for Presevo, Bujanovac and Medvedja. "No one has ever told me that in my life, nor is it possible for you to think that way. Those ideas are completely meaningless, so 6.5 percent of Albanians live in Medvedja, 425 Serbs live in Bujanovac, I don't understand what this is about," Vucic said.

He added that he respects the American ambassador Godfrey and that he has never felt pressure from him regarding Kosovo.

At the press conference, there was a conversation about going to the polls.

"Whoever wants to go out, let him go out, whoever won't, doesn't have to. I don't care at all," he was brief.

He once again referred to the recent arrests of clergy in Montenegro.

"Others can arrest church dignitaries without consequences, and we would have great consequences if we did that," he said.

He also commented on the current relations in the region.

"We will not run into conflicts, into the wars of the 1990s, but some people live in the 1990s, their heads cannot get out of that period", Vucic said, adding that no one in the Western Balkans should declare a victory, perhaps in the field of economy, or in the amount of GDP, but certainly not in the expulsion of the people.