NEW YORK -- Grigor Dimitrov came to New York as a loser of the season, but could end it triumphantly. On this wonderous US Open, Grigor Dimitrov has secured a special place

NEW YORK -- Grigor Dimitrov came to New York as a loser of the season, but could end it triumphantly. On this wonderous US Open, Grigor Dimitrov has secured a special place 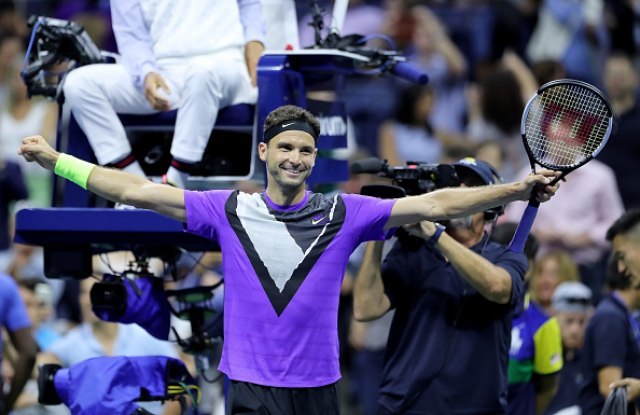 Grigor Dimitrov's victory over Roger Federer in the US open quarterfinal clash with a 0-7 record against 19-time major champion had surprised many, maybe himself as well, as nothing indicated something like that could have happened.

The world hadn't given him much chances in this match. But tennis would not be such a beautiful sport if the so-called wonders were not possible. Still, this is not a mystery, as Federer is in his late tennis years, with the pain in his upper back adding to a quarterfinal defeat: 3:6, 6:4, 3:6, 6:4, 6:2.

The Swiss with 38 years of age was the oldest quarterfinalist since Jimmy Connors who used to play in semifinal in 1991.

Grigor, on the other hand, had presented his rich talent earlier, but never followed through till the end of the tournament. In the match in which Federer performed 61 unforced errors, Dimitrov had done everything to make a breakthrough and win the match.

Still, the Bulgarian came into the clash determined to show his quarterfinal run wasn’t a surprise after seeing his ranking drop to No. 78 prior to the tournament. Black series cannot last long with the good players. It has to get going, and Grigor witnessed it on the US Open.

To make it even more ironic, he performed great just when neither of his two coaches, Agassi or Stepanek, traveled with him. Therefore, it may not be bad for him to travel alone in future, as Grigor has shown that without them he can defeat anyone, including Federer.